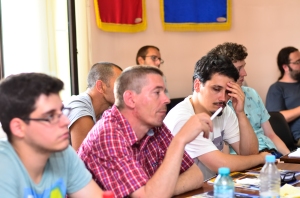 This summer’s 4th Annual Telciu Summer Conference was titled “Beyond East and West: Decolonizing Modernization” and took place June 24-25, 2015. Although the tradition of hosting international academic conferences is an already established tradition in the Transylvanian village of Telciu, this year’s was the first in a planned series of symposia that propose to examine modernity in its various historical hypostases and global iterations. In a manner consonant with the location, next year’s conference will focus on the intertwined themes of “rurality and modernity”. The call for papers, as well as details about a summer school on the same theme designed primarily for undergraduate students, will be publicized at an appropriate time.

Taking as a point of departure the need to explicate the power/knowledge mechanisms which frame understandings of “modernity” and configure uneven processes of socio-economic modernization, the papers presented this summer encompassed a variety of distinct yet complementary perspectives. These ranged from analyses that focused on the historical and epistemic (re)construction of colonial-type mechanisms and systems to investigations that highlighted the social hierarchies and structural violence inherent in the colonial matrix of power. The latter approach presupposed that this matrix persisted, albeit in modified forms, even after the end of formal colonial rule.

Considerations of space preclude describing the more than 20 contributions organized around thematic panels. What follows, therefore, is a critical précis and rejoinder to some of the papers presented. These contributions were not selected based on their perceived superior merits, but according to this writer’s academic interests. It is worth nothing, however, that the conference’s overall intellectual level was good though of course not always consistent. These inconsistencies, I would argue, are in themselves revealing, illustrating both the strengths and potential pitfalls inherent in theoretical approaches favoured by the participants. The latter point became evident both in the course of the individual presentations and during the ensuing lively and multi-vocal debates. Consequently, a good place to start our review is Ovidiu Ţichindelean’s keynote address and, which was titled “A Case for Decolonial Romania and Europe”. Therein he outlined the key features of decolonial theory – already sketched in the paragraph above – and worked through some of its practical implications for doing scholarship in and about the above-mentioned geographical areas.

One of the key points that emerged is that Europe was the centre for a variety of imperial systems, each with its own distinct features and systems of domination. The histories of Central and Southeaster Europe, in particular, were shaped by multiple imperial legacies, which certainly included the application of Soviet-like models of social modernization. This poses significant challenges for researchers interested in applying the insights provided by postcolonial and subaltern studies to the regions in question. This is because these bodies of scholarship were developed in order to account for the experience of British colonialism and its successor states and, to a somewhat lesser extent, the history of Latin America. A wholesale and non-reflexive application of this theoretical corpus to different historical and socio-cultural contexts would be decidedly unhelpful, no matter how well developed this body of theory might be. A brief example suffices in order to illustrate this observation. Until the series of 19th century westernizing reforms, Ottoman power/knowledge was quite different than its occidental counterparts. More specifically, there was no rule of colonial difference predicated on western notions of race since Ottoman social and political identities tended to be more fluid. Nonetheless, the analytical focus on the ways in which modernity is negotiated in various socio-cultural contexts, as well as the interdisciplinary concern with the social and political inequalities that configure subject-making and subject agency, make for potentially fruitful intersections between “Europe” as a unit of analysis and the above-mentioned theoretical corpus.

Accordingly, Norbert Petrovici analyzed the ways in which scholars from both the West and the East constructed the epistemic framework for analysing the post-socialist transition in Central and Eastern Europe. The thesis of this sophisticated though occasionally dense paper, titled “Framing Criticism and Knowledge Production in Semi-peripheries: Postsocialism Unpacked” was that the elaboration of a sharp dichotomy between socialism and post-socialism transformed the region into an epistemic enclave. The “self-orientalizing narratives” produced by the CEE scholars, Petrovici further contended, helped them forge alliances with academics based in the West. These alliances were predicated on taking the “East out of the normal flow of history” and in this way (re)produced asymmetries between the core and its academic peripheries.

On its part, Veda Popovici’s and Ovidiu Pop’s “The Postponed Belonging. A short history of the awareness of the periphery and the desire for Europe in the national Romanian construct” offered a complementary analysis to Petrovici’s by focusing on the perception of a temporal lag between Romania and Western Europe. The awareness of being part of the European periphery, they argued, was internalized by Romanian nationalist elites and thus became a central motif of Romanian national identity. There is much to be said about this paper, whose principal merit was to suggest new and stimulating lines of inquiry into the structure of Romanian nationalism. At the same time, the presentation was vigorously critiqued, mostly by this writer but also by others, for its lack of attention to specific historical contexts, as well for its insufficiently reflexive application of decolonial theory. It is all very well, the critique went, to highlight in one fell swoop what might be termed the “double consciousness”  (sicut W.E.B. Du Bois) exhibited by the 1848 revolutionary ethos, the Junimist critique of forms without substance, the interwar national ontologies linked to fascism, Ceauşescu’s ethno-nationalism, as well as the “non-critical Europeanism” of the post-socialist period. But is worth bearing in mind each of these ideological projects elaborated its own distinct sense temporality. In order to avoid the risk of essentializing Romanian nationalism, these temporalities would need to be elucidated by doing conceptual history in the classic and therefore rigorous sense of the term. At the time the paper was presented and defended there was no evidence that the authors contemplated such an approach.

By contrast, Emanuel Copilaş presented a balanced and nuanced analysis whose theme was “National-communism for Export: Ceauşescu’s Romania, the Third World and the ‘New World Order’”. Eschewing ritualistic condemnations of national communism, whose repressive aspects were taken as self-evident, Copilaş framed the regime’s tier-mondisme both as a means to consolidate its dissidence from Moscow and as a move to assert global influence by offering a model of socio-economic modernization suitable for adoption by other developing countries. Had Copilaş more explicitly linked Ceauşescu’s ideological tier–mondisme with the practical aspects of his internal model of “multilateral socialist development”, he would have articulated an even stronger analysis. After all, much of the nuts and bolts of his foreign policy involved securing natural resources for the nascent Romanian petrochemical industry and lucrative markets for Romanian industrial products (including arms).

Finally, there was a series of papers which fit well in this year’s theme and also anticipate next year’s focus on the rural world. Alina Branda’s fine presentation, titled “Beyond East and West, Anthropology as Intercultural Dialogue”, detailed the re-articulation of anthropological discourse in response to the global process of decolonization which already was fully underway by the late 1960s. Branda argued that a similar process of reconfiguring social-scientific concepts and goals by means of cross-cultural fertilization took place in interwar Romania, as exemplified by the Bucharest Sociological School. The theoretical and empirical apparatus of the Gustian School, which it developed in its quest to bring about a thoroughgoing social modernization of the Romanian village, was just such an example of intercultural dialogue. It was, on the one hand, influenced by the intellectually dominant German and French sciences of the nation. On the other hand, monographic sociology evolved both in response to the conditions of life in the Romanian countryside and as part of the Gustian strategy to position sociology as the pre-eminent science of the Romanian nation by rendering other social scientific disciplines ancillary to the monographic endeavor.

Although Branda’s wide-ranging, interdisciplinary investigation may be taken as an example of solid scholarship, this writer would have liked to see her analysis more firmly anchored in the twin processes of post-imperial disentanglement and state-building unfolding throughout interwar Southeastern Europe. I would therefore suggest that the Gustians spearheaded the national integration of the rural world by employing methods commonly associated with project of internal colonialism. Indeed, the Gustian project of state consolidation exhibits remarkable affinities to those undertaken in interbellic Czechoslovakia. This was made abundantly clear by Pavel Baloun’s and Filip Herza’s papers, respectively titled “‘Civilizing the Gypsy Child’: ‘Gypsy School’ as a Colonial Practice in Interwar Czechoslovakia’(1918-1938) and “Orientalism and the Discourses of Modernization: Czech Anthropology in Subcarpathian Ruthenia (1919-1938)”. These papers analyzed various modalities whereby internal peripheries and subaltern social identities were hierarchically malintegrated into the newly-created Czechoslovak state. In their own way, both authors showed that the period’s dominant discourses of modernization conceived of state consolidation as a mission to civilize the rural hinterlands, which were in themselves ranked according to their perceived degree of “backwardness”. In turn, this symbolic geography framed modernization experiments undertaken along both educational and eugenic lines.

In this way, Branda, Baloun, and Herza demonstrated how contemporary social theory can be combined not only with social history undertaken at the grass roots level, but also with more traditional forms of intellectual and political history in order develop compelling new approaches  towards understanding the “rural”. There is indeed a great need for such investigations. For, to borrow a phrase aptly coined by a colleague of mine, much of the rural world remains a terra incognita – not least in conceptual terms.

This summary would not be complete without acknowledging the hard work undertaken by the organizing committee composed of Valer Simion Cosma and Manuela Boatcă. Their efforts went a long way towards insuring the success of this conference. Special thanks are due to the Mayoralty of Telciu and to the “George Coşbuc” Bistriţa County Library for their generous financial and logistical support. The Faculty of History and Philosophy and the Seminar for Historical Anthropology at Babeş-Bolyai University were institutional partners in this endeavor.